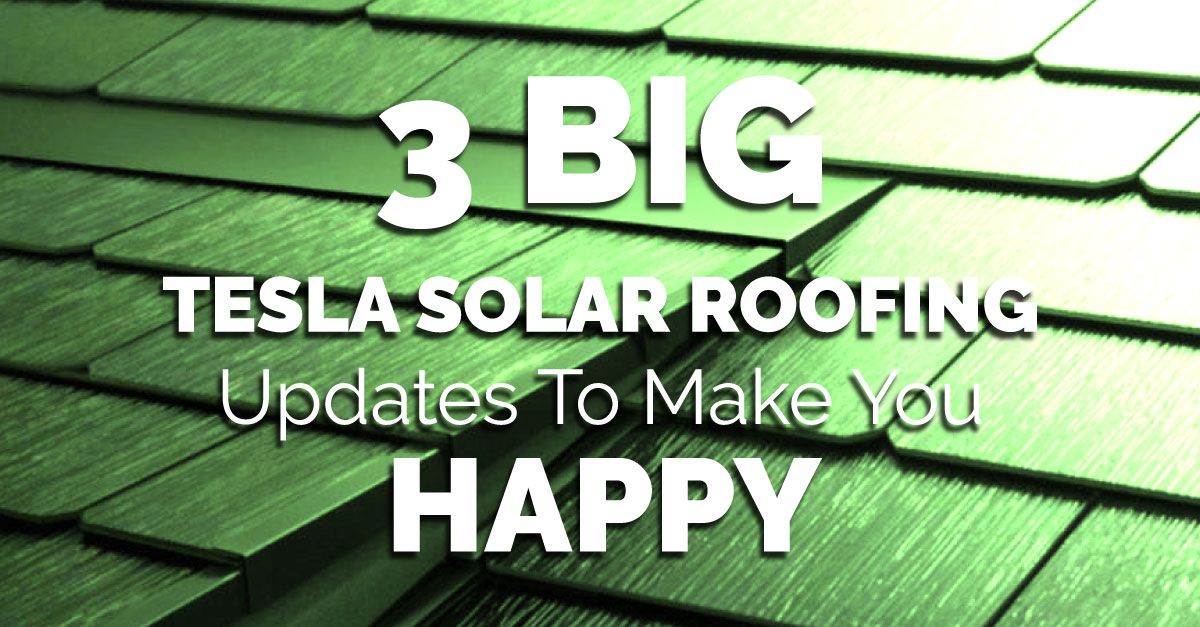 If you haven’t been keeping up with Tesla’s involvement with solar roofing, the main thing to know is they’ve been working on a solar roofing product for the last few years that will integrate seamlessly with your home design. Meaning instead of having to settle for bulky solar panels (which can be a real eyesore) you can install a roof which looks just like any other roof — but it happens to be solar-powered as well. To have a solar-powered roof and won’t affect your curb appeal (and could, in fact, improve it) is a dream for many homeowners. But how far along is Tesla with its new solar roofing product? The following are three major updates we think you’ll be pleased to hear.

Earlier this year, the Florida Public Service Commission ruled that Tesla can now sell residential solar equipment leases in Florida. In a statement, the commission declared their solar equipment lease does not constitute the sale of electricity and Tesla would not be considered a public utility under Florida law. This means neither Tesla nor their customers would be subject to commission regulation. The law states that leasing renewable energy equipment is legal as long as electricity isn’t effectively being sold to the customer.

This was the third time the commission ruled in favor of solar equipment companies, declaring solar equipment leases did not constitute the sale of electricity. The other two companies were Vivint Solar Developer Inc. and Sunrun, Inc. These rulings bode well for the future of solar roofing throughout Florida.

2. Tesla is continuing to innovate its solar roofing product

Tesla is known for its high levels of innovation, so it should come as no surprise they are continuing to innovate solar roofing — despite not making their solar roofing widely available as of yet. A new patent recently revealed that Tesla has come up with a way to speed up installation and simplify the wiring required to install solar roof tiles. The patent is titled “Hinged Building Integrated Photovoltaic Roof Tile Modules.”

With the new patent, it’s obvious Tesla is swapping the use of traditional, external wires for each one of their PV modules to a more mechanical system. Doing so will help almost eliminate the wiring currently needed for each module. Additionally, individual mounting blocks and drainage blocks will no longer be needed to mount PV modules. With the new technology, Tesla can mount a single backbone to the roof for every row of modules, thereby requiring less measuring and calibration — in turn speeding up the installation process, which could potentially help homeowners save money.

The good news is Tesla announced at their shareholder’s meeting that they were ramping up the production of their Solar Roof Tiles this year. Their goal is to manufacture at least 1,000 solar roofs per week by the end of the year. There were several reasons for the initial delays. First of all, the company encountered a number of challenges attempting to perform accelerated testing. This is the third version of their Solar Roof Tiles and they are obviously a lot more confident in their product now. Considering they have only installed a few hundred roofs since they launched their Solar Roof Tiles, the manufacturing of 1,000 roofs a week is good news indeed.

Tesla’s involvement in the roofing industry has shown us what the future holds — and the future is almost here! One thing we would like you to keep in mind –the Tesla Solar Roof Tiles are initially very expensive. However, you can expect to recoupe the cost through tax credits as well as through energy savings over time. It’s one of the reasons we here at Kelly Roofing are so excited about the potential of not just Tesla’s Solar Roof Tiles, but the future of solar roofing in general.

If you’re interested in learning more about solar roofing or would like more information about our roofing services here in Naples, FL, then be sure to contact us at Kelly Roofing today.