The Headache Of Hurricane Irma’s Backlash

The Headache Of Hurricane Irma’s Backlash 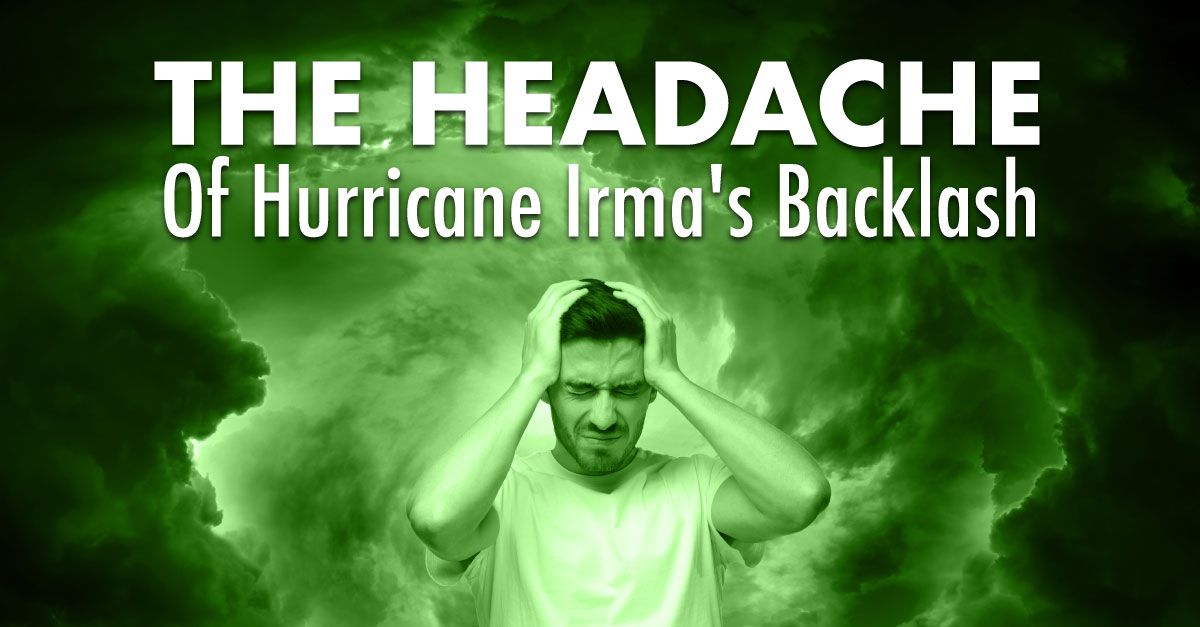 After the storm, professional storm chasers descended upon Florida to take advantage of the damage Irma caused. Transient companies that prey on unsuspecting homeowners and loopholes in insurance standards caused one of the most expensive storm recoveries in American history. Today, many of those insurance loopholes have been corrected, but the damage is done. And the aftermath continues as all our homeowners’ insurance rates are going up to pay for the expenses of new roofs.

From a Mole Hill to a Mountain

Many of these roofs were replaced because of a few cracked tiles – repairs could have been done had the tiles still been in production. But since major roof tile manufacturing consolidation occurred in the mid-2000s, many of the roof tile profiles and colors were discontinued. This opened the floodgates for massive numbers of claims to be fulfilled.

Storm chasers are very good at playing the insurance game. This is a yearly occurrence throughout the Midwest where most operate. Hailstorms damage shingle roofs throughout the hail belt, making a lucrative business for those companies willing to travel. They convince homeowners they “deserve” a new roof while threatening insurance companies with legal action if their clients aren’t made whole. The issue is, they know shingle roofs, not tile roofs. There is a significant difference in the way the two systems are installed.

The major difference between shingle and tile roofs is the flashing details. Flashing (transitional metal pieces used at edges, walls, plumbing stacks, vents and valley areas) is designed to keep water out of the building. On shingle roof applications, the flashings are simply sealed to the shingles to create a watertight condition. Tile roofs are two roofs in one. The base roof, or underlayment, and the top roof, tiles, create a double roof scenario requiring two different types of flashings. Being comfortable installing shingle roofs, and only using base flashings, Stormers neglect to install the top flashings which leaves the roof open to water intrusion.

Without the proper flashings, water freely flows under the tiles causing the roof to rely solely on the underlayment for protection from interior leaks. In just a few months or years, the underlayment breaks down and allows seepage. These leaks are not always noticed immediately as the attic’s insulation acts like a sponge soaking up the water and then drying out before enough saturation occurs to stain a ceiling, wall or floor. The best way to detect these leaks is to perform an attic inspection.

It’s sad to see the hurricane aftermath occurring. We are being called out to inspect issues with newly installed roofs completed just a few months ago by storm chasers only to find widespread leaks and a roof installed incorrectly. In many cases, major repairs are needed at all flashing areas. In some cases, the replacement of the newly installed roof is the only answer.

There are a number of ways homeowners are being ripped off. First is the code violations due to poorly installed roofs. Not only will the roof leak prematurely, but it will also not pass a home inspection at the time of sale. Even if it does, the seller could be liable for correcting the violations even after the sale is complete.

Second is the most serious and involves straight fraud. Many “contractors” utilizing the Assignment of Benefits (AOB) provision (which is now outlawed in Florida) received money directly from the insurance company for items outside of the roof replacement, yet did no work. They just pocket the money and leave.

This is how the scam works. A Storm Chaser tells the unsuspecting homeowner not to worry about dealing directly with the insurance company. They are told to sign an AOB, which assigns all rights to the claim to the contractor. They have the ability to not only deal directly with the insurance company but to decide the scope of work, argue costs, accept work performed, and receive all funds.

During the process, the Stormer often argues the home will need a new paint job due to “damages” to the walls. Insurance will pay the funds but the work is not performed, allowing the contractor to keep all the money. Since the homeowner did not know the painting was to be included and no longer has any rights to the restoration, they can’t complain. Our legislator stepped in to help prevent this type of fraud, but not before thousands of claims were filed under the AOB provision.

A condo association in East Naples is one such victim of storm chasers. A few months after their new roof was installed the board president noticed discoloration occurring on the roof. She attempted to call the “roofer” who installed the roof only to find out their number was disconnected and their license was full of unanswered complaints against it. She called us in to assess the situation and offer guidance. Having a strong relationship with the manufacturer, we were successful in securing replacement materials to replace the roof. However, since the roof replacement deductible drained the association’s reserves, they did not have the money to pay for the replacement labor, landfill fees, permit fees, and flashing replacement.

Not being able to utilize the replacement materials, the association donated the shingles to us and we are using it to replace Habitat for Humanity roofs damaged from Hurricane Irma where homeowners are not in a position to cover their deductible. This is an incredible case of generosity and ends up helping others. But the lesson is learned.

If you recently had a storm chaser work on your roof, we recommend having a professional roofing inspection ASAP to assess the integrity of your roof. A comprehensive roofing inspection report will detail all problem spots and sections with clear pictures and estimates for the repair work and be a real lifesaver. We will help you understand the damages on your roof and document everything to support insurance claims. Moreover, we can help you eliminate all roofing problems before they escalate into serious and costly problems.

During your roof inspection, our roofing specialist will climb up your roof and go into your attic to look for the following signs of damage:

Having a professional roofing inspection can save you time and money in the short-term and long-term. With our highly skilled roofing specialists, you are guaranteed a stress-free roof inspection and repair to breathe a new life to your roof. We only use the highest quality roofing materials and back up our job with a workmanship warranty. Contact us today to schedule a free roofing inspection or to get a no-obligation estimate.